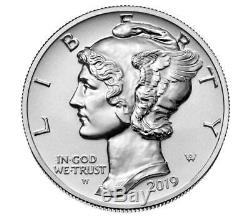 Is the third release Palladium American Eagle release. This coin contains an impressive purity of 99.95% fine palladium and weighs 1 troy ounce. The edge of the coin, beautifully reeded, adds to the dynamic appearance of this 2019 American Palladium Eagle.

This unique reverse proof palladium eagle coin wont be available for long, so get yours today! Following the American Eagle Palladium Coin Act of 2010, the mintage of Palladium American Eagles - the official palladium coin of the United States- officially began in 2017. The US Mint first released a bullion palladium eagle during that first year with a limited mintage of 15,000 coins. In 2018, the US Mint released its West Point Proof Palladium Eagles, also with a limited mintage of 15,000.

This year, the Palladium American Eagles contain a special reverse proof finish. The mintage for the Reverse Proof Palladium Eagle will be a mere 30,000 coins, making it a highly desirable addition to any palladium collection! 9995 palladium with a weight of 1 oz. Produced by the US Mint at the West Point facility. Comes with a Reverse Proof finish.

Limited mintage of 30,000. Each coin arrives in a box with a Certificate of Authenticity. Obverse: Features a portrait of Liberty with a special Winged Liberty cap, inspired by the Roman God Mercury. This design was adapted from artist Adolph Weinman's design used on the 1916 Mercury Dime.

Inscriptions: LIBERTY, IN GOD WE TRUST, 2019, as well as the designers initials. Reverse: Displays a majestic eagle perched on a rock as it carries a laurel branch in its beak. Adolph Weinman also designed this striking image.